In many constituencies, only one or two parties have a chance at winning the seat. This website shows you which way to vote in your constituency that is most likely to keep out the Tories.

How does that work?

What is tactical voting?

Tactical voting is placing a vote for a candidate that isn’t necessarily the voter’s first preference. Sometimes called ‘strategic voting’ or ‘sophisticated voting’, this method is typically used when the preferred candidate isn’t likely to be popular enough to win. In this case, the voter would simply choose one of the candidates most likely to win, rather than their first choice who has little chance.

The Conservatives were predicted to win by a landslide but they ended up losing their majority. In the 2017 election the Tories increased their vote share, but lost 13 seats. This was achieved by tactical voting. Our Tactical2017 site was visited by millions of people and our campaign had wide media coverage that reached many more people offline. We had thousands of followers spreading the word across the country, and the effect was huge. In short: it worked! 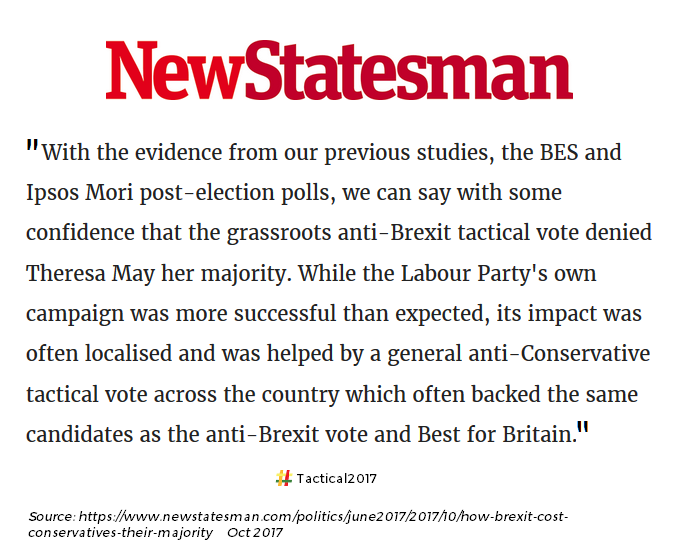 Will this work next time?

If we can build on the momentum from last time there’s no reason why we can’t go even further and stop the Tories from forming any sort of government at all. Many seats were very close with fewer than 100 votes deciding the winner. We only need a few more people to vote tactically to stop the Tories completely.

Yes we were! We’ve changed our name to Tactical Vote (#TacticalVote).

We considered calling ourselves "Tactical 2019" (or Tactical 2020) but the Tories seem to trigger elections whenever they feel like it so we wanted something that would work in any year.

How can I still help my preferred party?

You can see if your preferred party is recommended in a seat near you and campaign for them there.

What about Labour and Brexit?

Labour’s Brexit stance has been unclear in the past and a lot of people who are against Brexit are not certain if voting for Labour is a good idea. In an area where it’s a choice between the Liberal Democrats or Labour that is a fair consideration. But when it’s a Tory candidate vs a Labour candidate, make no mistake: voting for Labour in this scenario is the best chance of stopping Brexit. They are backing a People's Vote on Brexit and the Tories are not. There is no point wasting your vote on a Liberal Democrat or Green candidate who can’t win. It will only help the Tories stay in power and deliver Brexit. We all like to complain about the progressive parties not joining together, while the opposition put aside their differences and work together seamlessly. We must do the same if we want to beat them.

What is my constituency?

What data are you using to achieve these recommendations?

This website uses data from the 2010, 2015, 2017 and recent by-elections, polling and local election results, as well as historical and local information if applicable. An example of "local information" would be when one party steps down to help another.

Why are some of the recommendations TBC?

We will update our results nearer to the election. A lot can change in some seats and we don't want to cause confusion by giving recommendations too early and having to change them.

Will you recommend voting against the DUP in Northern Ireland?

The Tories don't run here, but the DUP could potentially form a coalition with them if they need a few extra seats. This happened in 2017. We will provide more information when an election is called. If you want to know more about the parties in Northern Ireland, please visit this site for a brief overview of each party: https://inews.co.uk/essentials/news/politics/general-election-2017-northern-ireland-political-parties/

Are you affiliated with the tactical voting spreadsheet?

Yes we are! We are a group of volunteers who came together when we saw the sheet to make a mobile friendly version that was accessible to all.

How did all this come about?

This website is a development of the original tactical voting spreadsheet created by @chickabiddybex which went viral in April 2017. We originally called the campaign Tactical2017 but we’re now called Tactical Vote.

Who created this site?

We’re a grassroots team of cross-party, anti-Conservative volunteers from a variety of backgrounds located all across the country.

How can I help?

This is actually one of the very few times that simply sharing something on social media can make a difference. Please spread the word to as many people as possible. Knowledge is power. If you think you have a skill that might be useful to us such as helping out with the site please get in touch at getinvolved@tacticalvote.co.uk And don’t forget to vote!

There’s a mistake in your data. How can I contact you?

Use the contact form on our website to report any data issues, or email us at getinvolved@tacticalvote.co.uk

I am in a position to spread the word to a large number of people, or I work for the press. Is there a press contact?